A unique and energetic force in contemporary British poetry, Agard has won many awards including the Queen’s Gold Medal for Poetry. Born in Guyana, South America in 1949, Agard moved to Britain in the late seventies. Cultural differences, class divisions and subverted racial stereotypes abound in his poems from adoptig the Caribbean tradition of limbo dancing as a symbol of freedom, to darkly comic, bitingly sardonic pieces such as ‘Half-caste’, one of Agard’s best-loved poems, which turns that phrase inside-out. 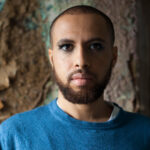